I'M going to be at the Southend Book Fair next Saturday flogging copies of Septic Isle. It's my first time as an exhibitor at any sort of book event so it's going to be interesting to see how well my work is received. Judging by an article in the local college magazine, DAVE, I certainly have a lot to live up to, the fair's organiser having described me as "an amazing talent" and "a leader in his field". I'd settle for being either of those things - then I'd be writing fiction for a living instead of doing crappy nine-hour shifts at my day job.

The book fair will be at South East Essex College (it's smack bang in the middle of Southend's main town centre street) on Saturday, June 7 from 10am to 4pm. Admission is FREE. You can find out more here: www.myspace.com/southendbookfair

* STILL waiting for the movie options stuff to be sorted. Hopefully in the next couple of weeks.

* CRACKING on with the writing and alternating between two scripts right now in a desperate bid to catch up a bit. Bashing on with Kurse is my first priority but am also about nine pages into Razor Snakes, something I haven't even got an artist for yet. I'm now off work for a week so should be able to make quite a bit of progress...
Posted by Unknown at 12:24 AM 4 comments:

Regie Rigby's Fool Britannia column this week talks about the Bristol Expo and reviews Septic Isle. It's possibly the most positive review we've had yet, with Regie concluding: "Seriously, [Septic Isle's] right up there with Oni’s Queen and Country and TV’s The Sandbaggers, which in this genre is about the highest praise I could give."

You'll find the review here.
Posted by Unknown at 12:31 AM 4 comments: 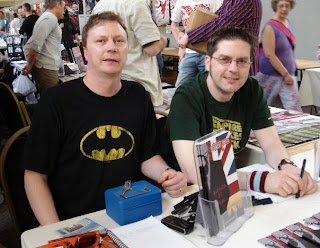 Here are a couple of pics of Septic Isle artist Mick Trimble and I at the Moonface Press table at Bristol. Note the mandatory nerd T-shirts and my rapidly greying hair...
Posted by Unknown at 1:17 AM 4 comments:

A Brit of all right 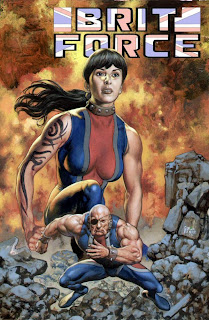 I'VE been meaning to make this announcement for weeks, so here goes. Moonface Press is proud to announce a new ongoing series called Brit Force. It's written and drawn by Andy Radbourne, lettered and script edited by me and the cover to issue #1 is by Glenn Fabry (above). Look for it later in the year and in the meantime find out more at www.britforce.com

* THERE'S a lovely review of Hero Killers here by Paul Brown. Yeah, I know it's a bit tardy but Paul has only recently got his hands on a copy!
Posted by Unknown at 1:20 AM No comments: 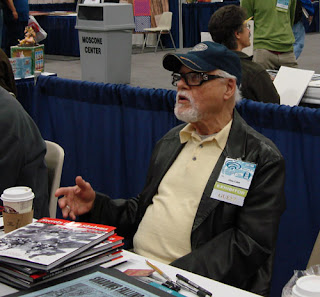 COMICS wouldn't mean nearly as much to me as they do if it wasn't for artist Gene Colan (above). I grew up pretty much obsessed with his beautiful, evocative work on Daredevil, Howard The Duck and Tomb Of Dracula. In fact, he's part of my Holy Trinity of all-time favourite artists that also includes Jack Kirby and John Buscema. Anyway, in the last few days Gene has been hospitalised with liver failure. As his wife, Adrienne, says: "My darling, sweet, handsome and brilliantly gifted husband's liver is failing. The complications are very nasty. This week it's fluid retention and encephalitis. He's on powerful meds now to diminish the symptoms. He sleeps a lot and has very little energy."

If you're a fan of Gene's, why not raise his spirits a little by sending him a get well soon card. Here's his address...

Also, writer Clifford Meth is organising a charity auction with all the proceeds going direct to Gene and Adrienne. This from Cliff's blog:

We're getting lots of email saying, "How can I help?" If you're a writer or artist or TV/film professional, please contact me at cliffmeth@aol.com -- Or just mail a drawing or signed book or whatever it is you're contributing to:

Items will be auctioned off at ComicLink.com (details, dates, etc. TBA)
Posted by Unknown at 1:00 AM 2 comments:

THE Bristol Expo just sped by in a blur this year. It seemed as if one minute we were arriving at the hotel and the next I was loading my stuff into the car and heading back up the M4 for Southend. Still, I've never had anything other than a great time at Bristol and so it proved again this year.

The Moonface booth had a prime position on the floorplan (opposite Forbidden Planet) and did a roaring trade for much of the weekend but especially on the Saturday. We sold lots of copies of Septic Isle and older stuff like Hero Killers and Blood Psi did steady business too. In fact, in terms of copies sold, it was our most successful Bristol since 2002 when we launched the first Devilchild volume.

The best thing about the Expo, though, is the people. It's just fantastic to spend time with the likes of Declan Shalvey, Mick Trimble, Simon Wyatt, Keith Burns, Bob Byrne, Colin Mathieson, Dave West and Regie Rigby . These are people that I not only admire but for whom I have genuine affection, even though I don't see them that often.

* LOOKS like the aforementioned movie stuff is going to take longer to conclude than I first thought - the people from the production company I've been talking to aren't coming over to London now until early June. This isn't as frustrating as you might think because, not having an agent, I'm having to find a solicitor to help me with the contract stuff. Updates as I get them...
Posted by Unknown at 1:53 AM 3 comments:

Just time for a quickie

CRIKEY, looks like it's going to be a big week. Not only will Septic Isle make its debut at this weekend's Bristol Comic Expo but the movie stuff is about to be concluded too. I'm not going to jinx it by saying any more at this stage but will hopefully be able to divulge a whole lot more next week.

* IF you're a superhero fan, you really should see the Iron Man movie. It's an absolute hoot with Robert Downey Jr pitch perfect as Tony Stark.
Posted by Unknown at 1:36 AM No comments: