1. WATCHED ten episodes of US sitcom 30 Rock on DVD. Alec Baldwin and Tina Fey are pure comedy gold.
2. READ the final two issues of World War Hulk – a rushed, rubbish ending.
3. BURIED a cat in the back garden (yes, the poor old thing was dead).
4. TRIED explaining the concept of death to my four-year-old son, Dylan. His response? "Is X Factor on tonight?"
5. SHOUTED abuse at Steve McClaren and his crappy England team full of overrated prima donnas.
6. WORKED out that I'm only at the day job for seven days in December. Yay!
7. WATCHED Robert Rodriguez's half of Grindhouse – Planet Terror – and thoroughly enjoyed every silly minute of it.
8. HAD impure thoughts about the extraordinarily sexy Rose McGowan as a result of watching Planet Terror.
9. GAVE up reading Douglas Coupland's latest novel, The Gum Thief ,less than halfway through. What has happened to my attention span?
10. SERIOUSLY thought about going to see American Gangster at the cinema but, erm, haven't.
Posted by Unknown at 1:51 AM 3 comments:

MY latest Starting Out column is up at www.indiereview.co.uk.

This month's subject is finding outlets to sell your comic or graphic novel if you aren't going to use Diamond. Hopefully there's some good advice in there.

* WHILE we're on the subject of British indie comics websites, be sure to check out www.comicsvillage.com. It's the brainchild of Craig Johnson who used to write regularly for www.silverbulletcomicbooks.com.

Rumour has it that Silver Bullets is about to shift its focus to cover Marvel and DC books only and change its name to Comics Bulletin, so Craig decided to set up his own "indies only" site.

At the moment the content is mainly columns and reviews (including a nice one for Devilchild Volume III) but I'm sure as it develops news and previews of forthcoming books will be added to the mix. They're certainly going to be on my mailing list from now on.
Posted by Unknown at 1:02 AM No comments: 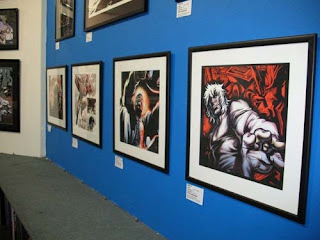 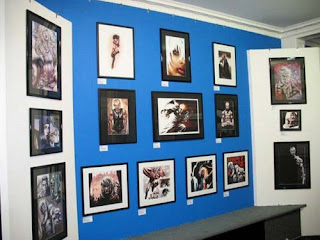 LAST night I went to the "private view launch party" of David Bircham's exhibition at the Animation Art Gallery in London. David's the artist on Brodie's Law (www.brodieslaw.com) and anyone who's seen his work on that title will already be aware of what a terrific talent he is.

I was expecting a couple of dozen people to be there and was rather shocked when a couple of hundred turned up - an amusing mix of comicbook nerds, Hoxton arty boys and drop-dead gorgeous women. It was so packed there were times when I could hardly move. Tucking into wine and nibbles with the best of them were Joel Meadows (Tripwire), Oli Smith (Hazy Tuesday), David Baillie (Scribe), Rob Dunlop (Tozzer) and Mike Conroy (Comics International).

According to David, the Brodie's movie is definitely on for next year with Samuel L Jackson, Jason Statham and even Daniel Craig all being linked with roles. I really hope it comes off for Daley and David as they work harder than anyone I know in UK comics (they've attended 35 conventions this year alone, while I've managed, er, two).

If you're in London doing some Christmas shopping, you really should spare half an hour to go and have a look at David's exhibition (as you'll see from the above photos it contains some lovely work). It runs until Wednesday, 21 November at the Animation Art Gallery, 13-14 Great Castle Street (a five minute walk from Oxford Street).

* I'VE had a stupidly busy week that, for once, didn't include any comics writing at all. However, I have started thinking about how I'm going to publicise Septic Isle and even bought a domain name for the micro-site that will be launched to support the book.

Ideally, I wanted septicisle.com or septicisle.co.uk for the site's url but both of these were already gone. I also thought septicislecomicbook.com or septicislegraphicnovel.com were a bit unwieldy. Anyway, eventually I decided to name the website after the book's "tagline" which, I think, is really catchy and thought-provoking. I shall reveal all in the New Year...
Posted by Unknown at 12:36 AM 3 comments: 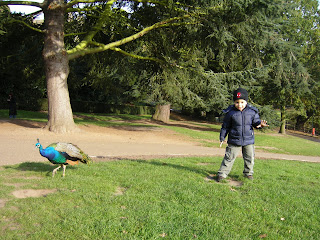 Dylan menacing a peacock in the grounds of Warwick Castle from a couple of weekends ago.

I'll be back to talk some shit about comics later in the week or early next...
Posted by Unknown at 5:47 AM No comments:

I'M off-work Wednesday and Friday this week and plan to take a short break from the comics writing.

Wednesday I'm going to bang out the next of my columns for the Indie Review guys and then pop into London for a bite to eat with Joel Meadows. After that we're heading off to see the exhibition of David Bircham's art at the Animation Art Gallery in Great Castle Street.

David's the guy who draws the excellent Brodie's Law (www.brodieslaw.com) and his art is on display at the gallery until November 21.

Friday is my son Dylan's fourth birthday so he and I will be heading into London for a look round the Natural History/Science museums and a trip on the rather interesting amphibious vehicle pictured above. The idea is that you get a tour of the capital with a difference - part on land, part on the Thames but all in one vehicle. I can't wait to see his face when it veers off the road, down the bank and into the river!

* ONCE this week is out of the way, I shall get back to the writing. I've currently got four comic scripts with artists and aim to have a fifth – Kurss – finished by the end of the year.

Before I get cracking on that though I plan to spend a couple of days revisiting one or two old scripts for short stories that I never finished. I want to see if they're worth having another crack at or whether they should go into my Unfinished File Of Doom.

* THAT brings me to plans for 2008. All being well Moonface should have a lot of stuff out next year - starting with Septic Isle in the spring. Meantime, I'll be busy beavering away writing more new stuff, these include Razor Snakes (a chunk of pure sci-fi), Pendragon (a three-issue mini-series with Simon Wyatt) and a slew of other projects that, at this stage, are a little more nebulous.

There's a book set in the same world as Hero Killers and featuring a couple of the same characters, a sequel to Septic Isle, something else called The Utopians, projects with Keith Burns, Mikey B and Alma O'Carroll, and the "controversial" story I mentioned a couple of weeks ago.

To be honest, I'll be happy if I can get half of them written before 2008 is done and dusted.

* THIS weekend is the Dublin City Comic Con and it's another one I won't be able to make (as I said it's my son's birthday this Friday, and Saturday is his party). I think one of my aims for next year will be to attend a few more comic-related events. I'm already paid up for Bristol and Birmingham, but new ones seem to pop up every year (like this one, for instance: www.thoughtbubblefestival.com) and I really should make the effort to get to one or two more. My stuff always seems to sell pretty well at conventions so it would make a lot of sense.
Posted by Unknown at 11:57 PM No comments:

JUST sent the final script for Tim Skinner: Total Scumbag to artist Declan Shalvey having finally wrapped it all up this afternoon.

There were a couple of pages towards the end that had been bugging me and that I just couldn't for the life of me get right. I'd tried to approach this particular idea from a host of different angles but couldn't get any of them to work properly - until today. As it turns out, the new scene I've written is probably my favourite in the entire book.

I ended up having to leave out quite a lot of material from my first draft of the script for one reason or another - some because it didn't sit right in the story and some because it just didn't work on the page as well as I thought it would in my head. I'm particularly gutted that I couldn't find room for my homage to/piss-take of Transmetropolitan. Beetle Bastard (aka Spider Jerusalem) might just see the light of day another time though...

The current plan is to launch Skinner as Moonface Press' first full-colour one-shot next summer possibly at the San Diego Comicon. We shall see...

* AREN'T cats peculiar creatures? Around four months ago one of ours, Freddie, disappeared. We didn't think anything bad had happened to him because his defection to new owners had clearly been on the cards for some time. He'd never got on with any of our other cats and was horrified when first one noisy child and then another turned up.

He'd been staying away for longer and longer at a time - 24 hours here, a few days there before seemingly buggering off for good back in late July. He was my wife's cat and she'd had him nearly 14 years, so she was understandably a bit upset and angry when he went. We all thought we'd never lay eyes on the mangy - but oddly loveable - creature again. Until yesterday when he just turned up completely out of the blue looking fit and healthy. He's been here ever since and seems to have fitted back in like nothing has happened. Absurdly, I'm actually worried about his new owners who must be wondering where the traitorous little shit has got to.

That said, I bet he won't last the weekend with us before he's off again - he really doesn't like the kids.
Posted by Unknown at 8:17 AM No comments:

IT'S been a busy week but I'm delighted to announce that the script for Tim Skinner: Total Scumbag is now just about finished. There are a couple of minor bits that still need fiddling about with but it's 99 per cent there. I'm really pleased with it too as it contains some of the maddest shit I've ever written. I'm going to send it over to Dec sometime next week and just hope he doesn't pass a brick when he sees some of the stuff I'm asking him to draw...

* THE family and I are off up to Warwick this weekend to visit my oldest mate Rob and his girlfriend Tracy. In January, Rob's set to become a dad for the first time - at the ripe old age of 42. The poor sod really has no idea what's about to hit him...
Posted by Unknown at 7:47 AM 4 comments: