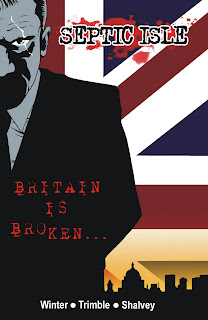 I'M featured in comicsvillage.com's Village Gossip section this week, answering questions on my favourite movie, alien visitation and what I'd like written on my gravestone. You'll find it here: http://www.comicsvillage.com/column.aspx?ArticleID=86

* IT'S shaping up to be one of those weeks. Our boiler packed up again (second time in a month) and the trains down this way have been playing silly buggers making getting into work even more of a pain in the arse than usual. Still, I'm off work tomorrow and Thursday and will use the time to crack on with Kurse.

I'm trying to get as much of the first draft down as possible because I'm fast approaching the point where I'm going to have the 52-page Septic Isle to get lettered and print-ready. Mick Trimble reckons he'll have SI's art finished by the end of the month and I'm hoping to have a dummy to send to Diamond ready for the end of February.

By the way, the name Kurse is taken from graffiti "tags" I've seen for the last few years around Barking and other parts of East London. One was painted in massive letters on the side of a house and was clearly visible from my train into work (they've painted over it now, the miseries). Anyway, the first time I saw the name I liked it and resolved to use it for something. After all, the bloke responsible (and it will be a bloke) is hardly going to sue me for copyright infringement, is he?

* CONGRATULATIONS to my good friend Joel Meadows on being made content editor of Comics International. The new iteration of CI has had a few teething troubles but, judging by Joel's work on the excellent Tripwire, I'm sure he's just the man to sort it out.
Posted by Unknown at 1:12 AM 1 comment:

THE interview I mentioned on Monday is now up at www.indiereview.co.uk - it's the first item on their home page. If you're interested in finding out about Septic Isle, Tim Skinner and the other Moonface Press goodies headed your way in the next 12 months go take a look...
Posted by Unknown at 1:14 AM 1 comment:

TURNS out the mightily-talented Declan Shalvey has his hands full with Frankenstein, Freak Show and a basketful of other paying work. We've therefore decided to push back the launch of the full-colour Tim Skinner: Total Scumbag one-shot to the Birmingham International Comics Show in October. It'll be worth the wait, though, honest.

That means my appearance at the San Diego Comicon (if it happens and I'm still mulling it over) will be all about pushing Septic Isle instead. This could actually work in my favour as SI is the kind of quintessentially English book that might just stand out there.

* THE front cover to SI is finished and I'll post it here soon. It ended up being a real collaborative effort in the end - artwork by Dec, logo by Will Sliney, and Dec and I going back and forth until we were both happy with the positioning and size of all the other bits on there. It looks great and perfectly captures the book's slightly chilly atmosphere.

* I'VE just been interviewed via email by Hassan from the indiereview.co.uk website. In it I answer questions about pretty much everything I've done including Devilchild, Hero Killers, Septic Isle, Brothers and Tim Skinner. Look for it on indiereview later this week...
Posted by Unknown at 9:18 AM 2 comments:

The fourth of my Starting Out columns is now up at www.indiereview.co.uk. This one is aimed at aspiring comics writers and offers tips on recruiting and working with artists.

You'll find it second item down on their homepage. I think they're going to be interviewing me soon, too.
Posted by Unknown at 12:46 AM 1 comment:

WILL Sliney's designed a suitably blood-spattered logo for my forthcoming graphic novella Septic Isle. Here it is...

Make Will a happy man by visiting his blog and checking out some of his gorgeous artwork, here: http://sliney.blogspot.com/

Septic Isle is my big launch for the first half of the year with its first appearance at the Bristol Comic Expo in May. Diamond permitting, the book will be rolled out to the rest of Britain and North America a little while after that. I'll post a fully lettered cover here in the next couple of weeks.

* I DON'T really do resolutions but I do have six real, achieveable aims for the year ahead...
1. 2007 was very much a "writing year" so the aim is to make 2008 a "writing and publishing year" in which I continue banging out the scripts while publishing most of the stuff already with artists. By year's end I aim to have at least three new books out there (probably Septic Isle, Tim Skinner and the Brothers two-parter) but four would be even better.
2. To have the long-delayed football story Scoregasm! finished and ready for launch in 2009.
3. To reach a wider audience. My books are being distributed by Diamond now and order numbers have been encouraging, but I'm keen to take that to the next level. I haven't got any extra cash coming in to pay for more advertising and marketing so need to work out how to better utilise the money I've got or maybe even find an already established company to publish my work (Image? Markosia?) Whatever, I think it's high time to explore a few new avenues to reach more readers.
4. To attend more conventions in Britain and the San Diego Comicon in the States.
5. To create some web-only short stories to entice punters over to moonfacepress.com. The first of these will probably be The Saboteur, my three-pager with Mikey B.
6. To continue to improve as a writer. I've got loads better in the last year but now intend to take on projects that are really going to stretch me - writing a three-issue mini-series (Pendragon) will be start of that but I also want to tackle more difficult subject matter (that'll be The Utopians then) and start to experiment with my story-telling a bit more.
Posted by Unknown at 12:15 AM 6 comments: