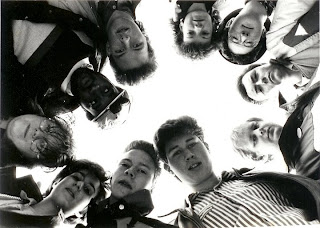 SEE that fresh-faced young scamp at the front there, between the girl with short hair and the big galoot in the striped shirt? That's me, from around 1986, when I worked as a presenter/reporter on a BBC Radio Northampton 'yoof' show called The Team. I hadn't laid eyes on that pic - a publicity shot for the show - in at least two decades but then a former colleague put it up on Facebook this week.

It made me feel very, very old but it also reminded me of just how good The Team was, especially in terms of the music it played - reggae, hip-hop and indie-rock were all staples of the show. We were playing the likes of Schooly D, Misty In Roots and Butthole Surfers on a Sunday night on a conservative local radio station whose usual output rarely got any more radical than the Traveling Wilburys and Kim Wilde.

The best thing about working on The Team for me, though, was that I got to interview loads of great bands and singers. I chatted to Sonic Youth, Swans, James, Danielle Dax, Zodiac Mindwarp, Steve Earle, Spacemen 3, Ruby Turner and a hundred others the sword of time has cut from my memory.

I also spoke to the silly Tory MP who tried to get the Beastie Boys banned from Britain, and Boy George's brother immediately after the Culture Club singer's heroin-related fall from grace. Best of the bunch was interviewing Rowan Atkinson at the height of his Blackadder fame. Just me and him in a radio studio for around half an hour talking comedy was heaven for a teenager who'd been a massive fan of Not The Nine O'Clock News.

Of course, it wasn't all plain sailing. There were constant arguments about the show's direction - I was firmly in the camp that believed an NME/John Peel vibe was best, others saw it as a more mainstream No Limits-style proposition. Because I was such a control freak/force of nature/total bastard back then, my side almost always got its own way which didn't exactly endear me to my colleagues. Yes, I was a dick but I always had the show's best interests at heart - at least that's what I tell myself all these years later whilst trying not to cringe at some of the terrible things I said and did.

And then there was the rather unpleasant altercation with a local band, called Stiff Lizard, whose awful single we refused to play. They got very upset and tried to attack me at a gig we put on at Northampton's Roadmender Centre. In retaliation we snapped their single in half live on air the following Sunday. God, even typing those words feels childish now. (Funnily enough, a few years later I was editing Splinter, a Northampton music magazine, in which I gave a demo by a duo called Hex a glowing review. I then went along to see them at a local pub only to discover they had both been members of Stiff Lizard!).

For its part, Radio Northampton was always pretty supportive. I think the station's suits liked having something a little edgy on their schedules, even if we landed them in trouble a couple of times (I'll never forget the on-air apology we were forced to make after cracking a joke about snooker players all taking cocaine or the horrified look on a senior producer's face when we played the Beasties' 'It's The New Style' featuring the immortal lyric, 'We told her some rhymes so she pulled up her skirt'). There were, of course, snipers and whiners who resented a bunch of ill-educated teenagers playing on their turf once a week, but they were mostly ineffectual posh twits with no bark, let alone a bite.

It seems odd now, but we never knew or even seeked to discover how many people actually listened to The Team. Frankly, we didn't give a toss. It could have been 10,000, it could have been 10. No one was interested in chasing ratings or poring over demographics; we did it because we loved it and felt we had something to say. And I think that's the reason why I'm still so proud of it.

Neil, the former colleague who posted that photo on Facebook, is threatening to upload a couple of old episodes of the show to the net and I have a horrible feeling it will sound terribly earnest, horribly dated and a bit pretentious. But, hey, being earnest and pretentious in the 80s was practically a badge of honour.

I eventually quit when I started to feel exploited (I poured my heart and soul into the show for a couple of years for little more than expenses) and realised my reputation for being 'difficult' probably meant proper employment lay elsewhere. I did more radio at university and for the BBC in York but my experience on The Team had been so enjoyable that nothing else came close to matching it, and I soon shifted my focus to magazine journalism. But that's another, not terribly interesting, story...
Posted by Unknown at 5:50 AM 2 comments: