THERE'S a nice mention of Septic Isle at Terry Hooper's popular www.comicbitsonline.com site. He says: "... this story has elements of the TV series/books featuring the character Callan [starring Edward Woodward] and even The Professionals.... I enjoyed the story and art and if you get a chance to buy a copy – DO!"

I rather enjoyed the Callan comparison as it was a TV show I loved growing up as a kid - and I'll happily take the Professionals comparison too!
Posted by Unknown at 4:39 AM 2 comments:

* I'VE booked a table at the Southend Book Fair in June after being approached by the organiser. They're quite keen on attracting local and indie authors but it's still going to be interesting to see how the crowd react to a – gasp! – comics writer showing up. They'll probably try and beat me to death with their copies of The Great Gatsby or something...

* I HAVE another meeting with the LA movie people the week after the Bristol Expo. I'm currently redrafting the Kurse outline for them (they wanted something a bit lighter and comedic than the one I originally sent over) and hope things are going to move forward from there. The only downside of writing these outlines, of course, is that it's severely limiting the amount of time I've got to write comics. At this rate I'll still be writing the Kurse comic-book this time next year!

* The Bristol Expo is just a fortnight away and I'm looking forward to it in much the same way a small child anticipates Christmas. It's not just because I want to sell lots of copies of Septic Isle but also because I can't wait to catch up with people I haven't seen in a while. These include Blood Psi artist Keith Burns, who has recently returned from his year working in Hong Kong; and Phill Evans, who, despite being one of my oldest and dearest friends, I haven't laid eyes on for nearly three years! For once, I think I might actually indulge in a drink or two...
Posted by Unknown at 1:11 AM 1 comment:

THERE'S a another review of Septic Isle over at Comics Village, in which writer Glenn Carter gives the book 9 out of 10. You'll find it here:

http://www.comicsvillage.com/review.aspx?reviewID=212
Posted by Unknown at 12:57 AM 8 comments:

The first review of Septic Isle is in and it's overwhelmingly positive. It's written by Joe Gordon and you can find it here: http://forbiddenplanet.co.uk/blog/?p=7087

A few quotes from Joe's piece...

"Andy and Mick do something remarkable – they make you feel sympathy for a suicide bomber."

"The central character is Jacob Marley, a nice Dickens reference for a man who’s almost a ghost of his former self..."

"I can see fans of Queen & Country or even Shooting War picking this up and enjoying a story which eschews gee-whizz gadgets and heroics for a more realistic tale which avoids the stereotypical plot traps of many of its fellows."
Posted by Unknown at 8:07 AM 1 comment: 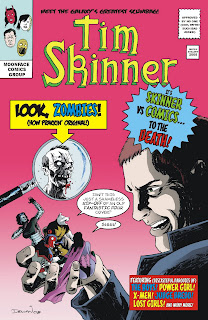 I MENTIONED the other day that I'd soon be publicising the Tim Skinner: Total Scumbag one-shot we have coming out towards the end of the year. Anyway, this is the design for the postcard to be given away at the Bristol Expo (art by Declan Shalvey, words by me). I think it looks great and Dec says he'll be cracking on with the artwork for the book when he comes back from New York (the lucky beggar's at the Big Apple Con this week). All being well, it should be finished and ready to launch at the Birmingham International Comics Show in October.

Oh, and in case you're wondering, this is the FF cover we've shamelessly ripped-off, er, homaged... 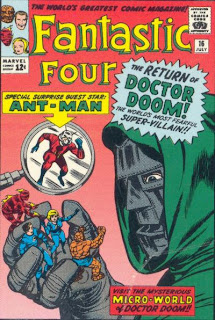 Septic Isle arrived from the printer yesterday and it looks magnificent - production-wise easily the best comic-book I've yet been involved in.

It's the first time I've tried digital printing since the printer I used to use made an unholy mess of the first run of Hero Killers and Blood Psi. Since then I've been firmly wedded to litho printing and didn't think I'd be changing my mind. But Cambrian, the Wales-based printer I use now, produced some really nice samples from the page files I sent them and so persuaded me to give digital printing a second go. I'm glad I did and not just because the quality of what they've produced is so high - digi print is also substantially cheaper than litho meaning that I can afford to sell Septic for a paltry £3.95 (for 52 perfect-bound pages).

Any self-publishers reading this who are looking for cheap, reliable printing could do a lot worse than get a quote from Cambrian; their website's here: www.cambrian-printers.co.uk
Posted by Unknown at 12:14 AM 3 comments:

Blimey, the Bristol Expo's less than a month away. Where did that come from? As usual I have two tables and this year will be pushing copies of Septic Isle on anyone who comes within six feet of me. The book's artist Mick Trimble will be on hand for most of the weekend to sketch and sign copies and cover artist Declan Shalvey will also be around for an hour or two I'm sure. My good pal Jamie Richards is threatening to help out on the table too so make sure you ask him for a Star Wars-related sketch - trust me you won't be disappointed!

I'm also really pleased to announce that Bob Byrne (2000AD, MBLEH!) will be guest of honour on the table all weekend selling copies of his brand new and reportedly spiffing graphic novel Mister Amperduke. Bob couldn't get a table (according to Expo organiser Mike Allwood space ran out back in December and there's a waiting list that could comfortably fill the hall again by a third) so I was happy to step in and offer him a bit of space. Bob's a hugely talented creator and a top bloke so I'm sure it's going to be a lot of fun having him around.

The table will also feature some publicity material for two forthcoming Moonface releases: the Tim Skinner: Total Scumbag one-shot (drawn and coloured by Declan Shalvey who, I notice, has been nominated for ANOTHER Eagle Award), and the ongoing superhero series I'll be talking about on here in the week, the first issue of which has a cover by Glenn Fabry. Yes, that Glenn Fabry.
Posted by Unknown at 1:30 AM 2 comments:

THE fifth in my series of columns about self-publishing is now up at indiereview.co.uk. This one is aimed at creators about to attend their first comic convention as exhibitors and works as a 10-point checklist of things not to forget. You'll find it here...

* WITH Septic Isle at the printer (we're at the correcting proofs stage now) and the three movie outlines written, there was a brief moment at the end of last week where I felt I'd cleared the decks. Then I remembered I'd still got a script for Kurse to get on with and a ton of lettering for the six-issue, superhero mini-series that I'm publishing but not writing (expect an announcement soon about this). Looks like my forthcoming week off work is going to be as restful as ever...

* FINALLY saw the Ghost Rider movie last night and found it a frustrating, underwhelming experience. Nicolas Cage, Peter Fonda, Sam Elliot and Eva Mendes were all fine and the effects budget clearly had a few quid in it, but the script was rotten and the baddies under-developed to the point of anonymity. A missed opportunity...
Posted by Unknown at 1:26 AM 2 comments:

THE final outline has been written and is now with the LA movie people. More news soon hopefully...

The last outline I wrote for them was one for Kurse. Now, if you're a regular reader of this blog, you'll know that I've been writing a Kurse one-shot for the last few months and that progress has been even slower than usual. Although a lot of the stuff in there - characters, ideas, situations - were pretty good ones, it just wasn't hanging together in the way that it should. It felt like two or three different stories sort of mushed together and was therefore a bit uneven.

A way of fixing all the problems came to me last week and the solution was simple. In the words of Edwyn Collins, rip it up and start again. So I did. I kept quite a few elements from the original story but have completely reconfigured everything else - most of the plot has completely changed, almost all the characters have changed and the story is infinitely stronger as a result.

I was about 20 pages into writing the comic-book version of Kurse and it means I'm going to have to start from scratch but this is a small sacrifice to finally get the story working as it should. God knows what the poor bloody artist, who has been waiting for a script for two years, is going to think though...

Luckily, I have another week off work soon and shall spend it banging out Kurse script pages like there's no tomorrow. Unless I change my mind again that is...
Posted by Unknown at 2:04 AM 4 comments: