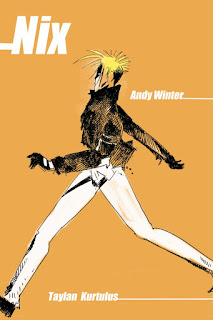 An early cover idea for a project - called Nix - I've been working on with the fantastically talented Taylan Kurtulus. Taylan has one of the most unusual art styles I've come across and I love it! This is one of the projects I'll be pitching around to publishers later in the year.
Posted by Unknown at 1:23 AM No comments:

I'VE been extremely busy since the turn of the year and don't plan to take my foot off the accelerator any time soon. As any regular readers will know, I've been trying – and mostly failing – to get a number of projects off the ground for the last couple of years. All that hard work, anguish and frustration finally seems to have proved worth it though. I have a lot of stuff on the go at the moment and, for the first time in a long time, a roster of artists I trust to help me pull it all off.
First up is Defiant! The Legend of Brithnoth, a graphic novel based on the famous(ish) Anglo-Saxon poem The Battle of Maldon. Dan Bell is the artist and it's coming out next year through Steve Tanner's excellent UK indie, Time Bomb Comics. It's been easily the most difficult thing I've ever written and it took me a long time to work out exactly how to adapt the original poem. I've tried to stick to the facts as they are known but have fictionalised and taken liberties a fair bit too. We're going to start publicising Defiant! at the London Super Comic Con next weekend.

Next up is a sci-fi project, called The Good Ship Otzi, which has found a publisher in the Netherlands. R-Comics is a small publisher with big ideas – just the sort of people I like in other words. I'm not sure as yet whether the book will be a mini-series or an ongoing but I'm about halfway through writing the first issue and reckon it would work pretty well as either. You'll hear far more about this in the weeks and months to come. The artist, Mike Harrington, is going to be creating a dedicated website for the project and I'll have more on that soon too.
Beyond these two projects I have five or six more that are at various stages of development. Most of them are with artists and I'm hoping to have stuff to pitch before the end of the year. Like I said busy, busy, busy...
Posted by Unknown at 12:30 AM No comments: