Defiant!, Nix and other stuff 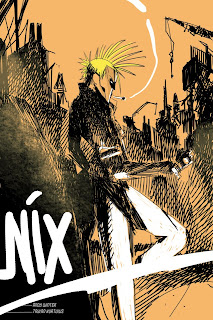 WORK continues on Defiant! The Legend of Brithnoth and I can finally see an end to the 80-page script now. I'm probably about two-thirds of the way through and pretty happy with how it is progressing.

I really underestimated just how tricky it would be to write an adaptation of something - especially an historical event in which few solid facts are really known but one that requires a certain amount of authenticity and accuracy to make work. I soon realised the original Battle of Maldon poem fragment (all 325 lines of it) gave me the spine of a plot and characters but not much else. I had to make up the rest.

At first I found it horribly daunting and there were a couple of times I just hit a big energy-sapping wall. But eventually I just said, 'Sod it' and decided to tell an entertaining story that incorporated the themes and events of the original poem but that took great big liberties elsewhere. I think it works, although I'm not sure about the car chase on page 42 or the alien invasion at the end (joke!).

* I'M also submitting more projects to various publishers. The latest of these is Nix (see above), a rude and rambunctious time-travel yarn illustrated by Taylan Kurtulus and lettered by Nikki Foxrobot. It's probably the most eccentric thing I've ever written and Taylan's off-kilter, European-styled art make it an even stranger proposition. I really hope it finds a home.

* BEYOND those two projects I probably have another six or seven on the go at various stages of development. These include one I've been trying to get off the ground for years - thankfully I found a cracking artist a couple of weeks ago and we're flying!

I also have a couple of new story ideas that require artists, so if there's anyone reading this who might be interested, feel free to give me a shout at andywinter1@gmail.com
Posted by Unknown at 5:17 AM No comments: