Defiant: The Legend of Brithnoth is finished and should appear in Previews (at least the UK bit of it) early next year. There has been talk of launching the book at one of the country's multitude of conventions but nothing has been confirmed yet. Possibly the London Super Comic Con, in March, or The Birmingham Comics Festival (publisher Steve Tanner is one of the organisers) the following month. Perhaps even both. When I know, you'll know...

I'm really pleased with how the story came out - artist/letterer Dan Bell and I spent a lot of time tweaking bits here and there to get it right and I think that has paid off. I think it's one of those stories that will need to be read more than once to really get the most out of it. I've tried some storytelling ideas that I haven't used before and taken some serious liberties with the original poem but hopefully it all works as it should. I'm very proud of it and can't wait to see it printed and published - Dan and I have spent the best part of two years on it!

* Most of my time this year has been spent working on Hushers, a graphic novel for another UK publisher being drawn by Italian artist Manuela Bassu Lebrino. It is all written and Manuela is due to start illustrating the final chapter any day now. It's looking good and will almost certainly be the thing I talk most about on here in the coming months.

* Working on Hushers meant that plans for the Tim Skinner: Retconned webcomic slipped down the schedule but I've now finished the third chapter and only have the fourth and final one to write. Artist Ruairi Coleman sent me the first few inked pages the other day and it looks brilliant. Ruairi is signed on for at least the first two chapters but might have to drop out after that to concentrate on his work for US publisher Dynamite, where he is currently drawing Turok: Dinosaur Hunter with the equally excellent Stephen Downey. One way or another, though, there should be new Skinner in 2015.

* And that's about it for now - we're nearing the end of another year in which this blog has been updated even less than usual. I'll try and make it one of my new year's resolutions to change that. In the meantime, have a lovely Christmas and a happy start to 2015.

Posted by Unknown at 1:50 AM No comments: 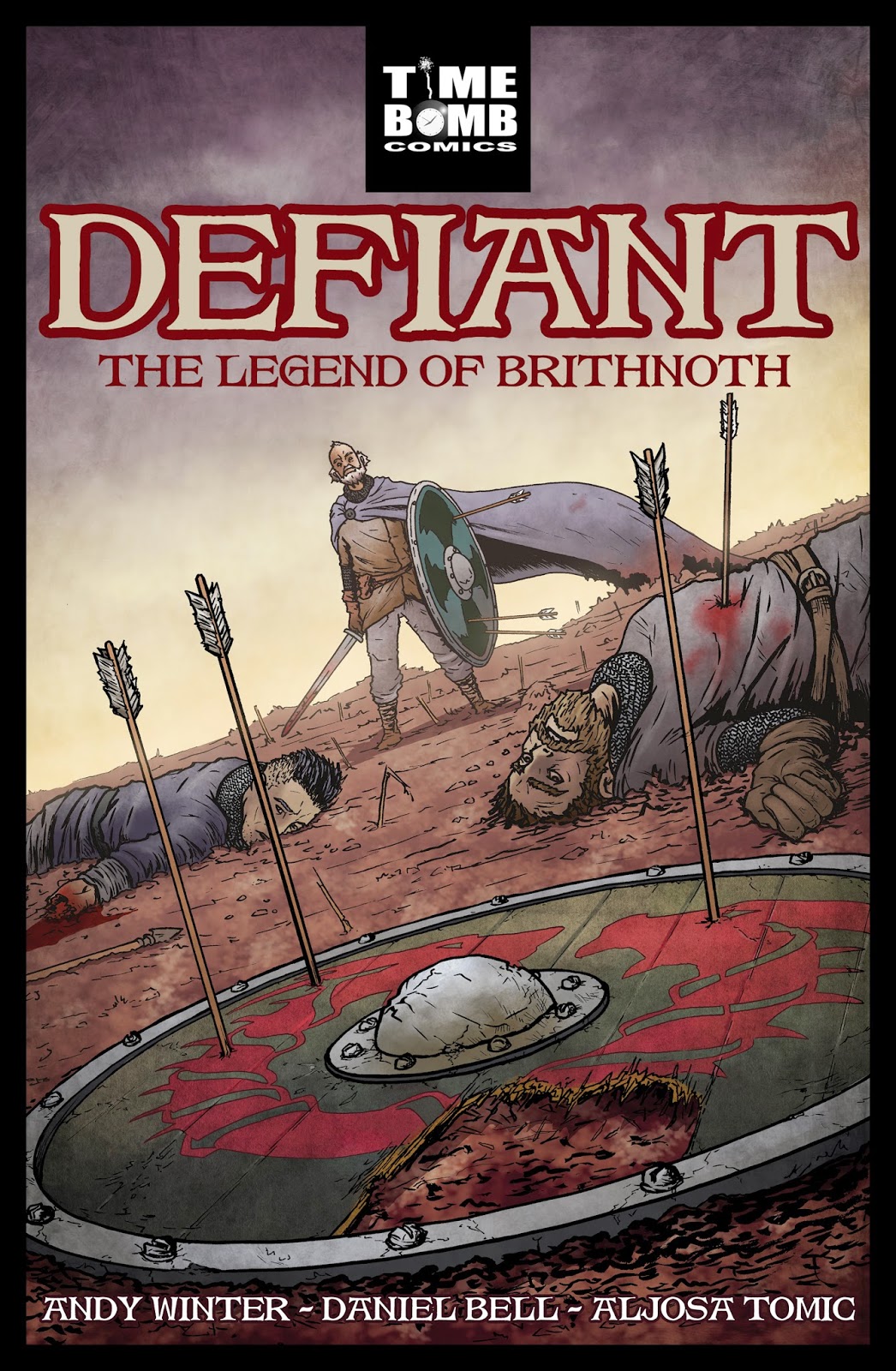 Defiant: The Legend of Brithnoth now has a cover (above, click to enlarge), courtesy of Dan Bell and Aljosa Tomic.

The book itself is very close to being finished. I'm currently proofreading all 84 story pages while artist Dan busies himself designing various bits of backmatter.

Proofing a story is, I think, one of the most important parts of the creative process (but, then, as a professional proofreader and sub editor, I would say that). Having one last thorough read through what you've created is crucial because you almost always identify one or two things that haven't quite worked. Not just typos but maybe the odd scene in which the art and dialogue don't mesh correctly, a vital detail that has been underplayed, a misplaced speech balloon...

It will hopefully hit Previews before the end of the year and see actual publication through Time Bomb Comics early in 2015. We're also discussing launching it at one of the UK's many comic conventions but nothing has been confirmed as yet. More details as and when I have them...

* On the subject of Time Bomb Comics, they currently have a book out called Longship, by Lawrence Rider and Rebecca Teall. It's a clever and really quite touching tale of a Viking boat, a father and son, and a funeral. You really should buy it. Drop them a line at: sales@timebombcomics.com or order the book through your local comic shop.

* And while I'm dishing out plugs, Defiant colourist Aljosa Tomic worked on the most recent issue of Veil (#4), by Greg Rucka and Toni Fejzula, through Dark Horse. It's a terrific and unusual supernatural mini-series from Lazarus and Queen and Country writer Rucka so well worth picking up.

Posted by Unknown at 5:39 AM No comments: 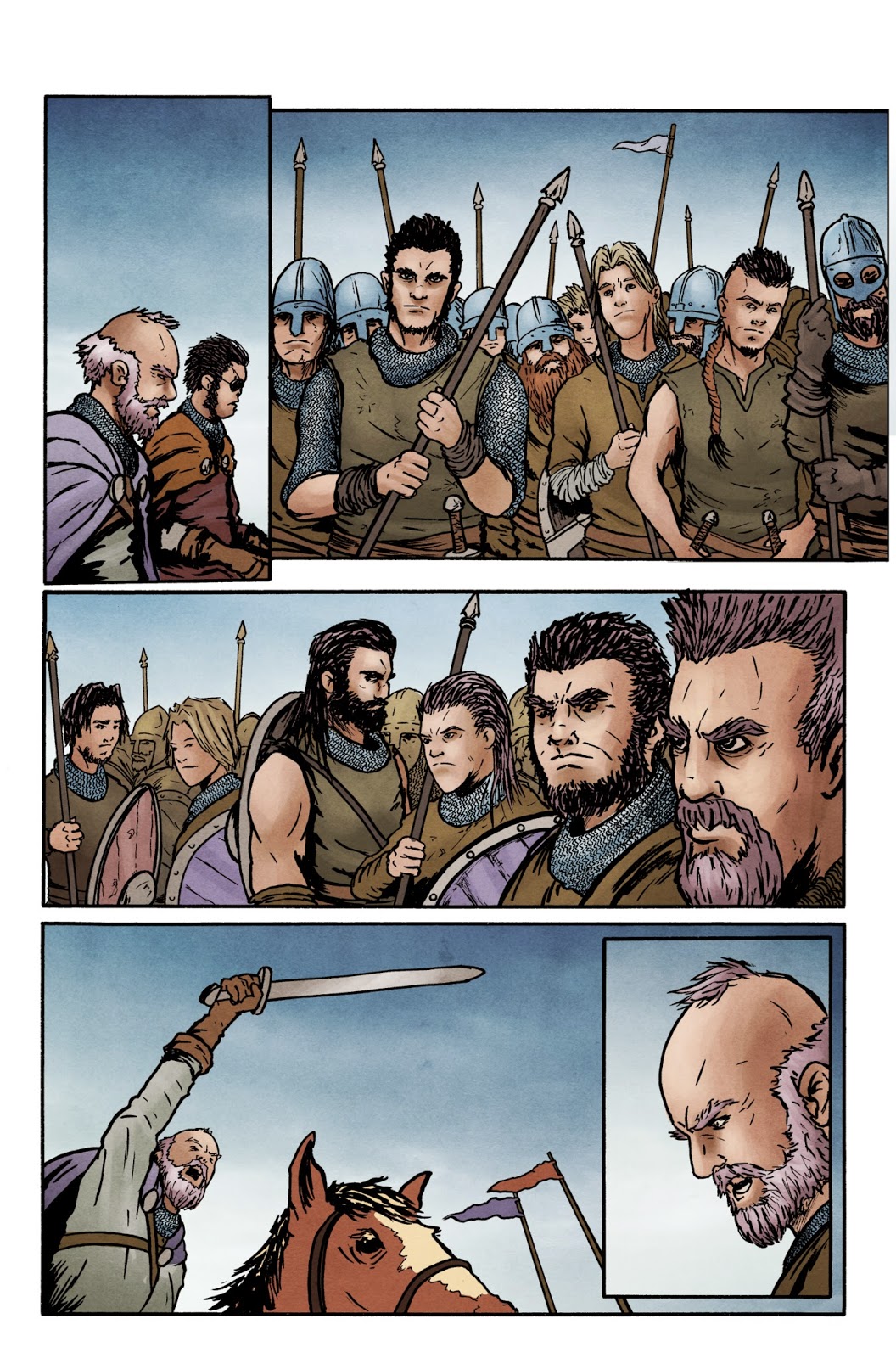 HAVE I really not updated this blog since the middle of November 2013? Yes, that's exactly what has happened. How embarrassing.

It isn't that I haven't had a lot going on, because I have - bloody loads, actually. I am, however, trying to avoid talking about projects until something actually, properly concrete exists. Like finished pages, printed issues, viewable webcomics... that kind of thing. Because I've noticed that I come on here and jabber on about what I'm up to and then, more often than not, bugger all ever comes of it.

There are also things I won't talk about because I don't want to jinx them - after this morning, one thing in particular...

A few projects I will mention though, purely because they seem a bit more concrete than most of the half-arsed, airy-fairy nonsense I blather on about.

Firstly, I've finished writing the first episode of Tim Skinner: Retconned for Ruairi Coleman to draw. The idea - at least as it stands - is that we will finish all four episodes before the first one goes live and that the episodes will appear weekly for a month later in the year (September is favourite right now). I'm very happy with the first episode and had forgotten just how much fun it is to write Skinner.

I've also penned a one-shot for artist Henry Simon to illustrate. It's a pulpy sci-fi story featuring motorcycle gangs that runs to 28 pages. There's also a seven-page short story for artist Jim Lavery. I'm really proud of this one, actually, and I'll be going all out to get it into a decent anthology.

Thing is, though, I've mentioned those three projects and none of them actually properly exists yet. Any one of them could go tits up tomorrow, making me look foolish... again.

So, let me turn my attention to Defiant! The Legend of Brithnoth, which is becoming more and more real with every passing week. Artist Dan Bell only has a few pages and the odd panel revision to go before pencils and inks on the book are finished. I suspect Dan will treat himself to a stiff drink when it's all done. Then it's just the colouring and lettering, the cover and backmatter to sort out. Easy.

There's other stuff - stuff I'm pitching, stuff I'm struggling to find reliable artists for... the usual. I'll talk about it when and if... or probably not at all.

Posted by Unknown at 7:55 AM No comments: