The Blood Psi micro-site is now open for business. Amongst other things, you'll find a 10-page downloadable PDF preview and some nice new character sketches courtesy of the book's artist Keith Burns. It's here: www.bloodpsi.com.

* This week has been all about tying up promotional loose ends for Blood Psi to coincide with the release of the new Previews (out now, I think). I've just done a massive postcard mail-out to US and UK retailers in a bid to persuade them to order the book. I think this strategy worked quite well with Hero Killers but, to be honest, I'm basing that assertion on a hunch rather than any properly collated information. That's the problem with this promotion and marketing malarkey, you really have no idea which bits of your plan have worked and which bits have made no impact whatsoever.

Anyway, I'm hopeful of getting a decent number of orders. The new Buffy Season 8 comic has been doing big numbers so I'm hoping my very own vampire comic lures in some of the Joss Whedon crowd.

* The TV in our main living room has been broken all week. Normally, this wouldn't be so bad because a) it'll be fairly easy for me to catch up on favourite shows such as Prison Break and BSG at the weekend after it's fixed and b) less TV for my square-eyed three-year-old, Dylan, can only be a good thing.

The thing is, lack of telly means my missus has the radio on. Now, I adore my wife but her taste in music is truly appalling. Under normal circumstances, I'd find it impossible to stomach more than about two minutes of Magic FM but I've had to listen to hours of it. I swear to god they've got Annie Lennox, Phil Collins, Eric Clapton and Ronan cocking Keating on a permanent loop. Even Bono jamming with Bloc Party would be preferable to this. Just.

I appear to be going through one of those rare phases when I'm getting quite a few good story ideas all within a few days of each other. There's a short story or two in there, maybe a couple of mini-series or graphic novels too.

Of course, the problem for me is finding the time to actually do something with them all. Even though I only work at The Mirror four days a week, the amount of time I actually get to write scripts is still pretty small. (The weird effect of this is that I have a pretty good idea now what I'm going to be working on this time next year).

Recently, I was reading a column by an up and coming British comics writer who reckoned he'd banged out over 400 pages this year alone. I'd be happy with half that amount - heck, even a quarter!

Maybe I shouldn't be too downhearted though. I've already finished Septic Isle this year and am well on the way to wrapping up Brothers, too. Compared to previous years, that's pretty prolific!

Brothers: Script nearing completion. Will Sliney should still be drawing this but he's kind of busy with other work so we'll have to see. Title might well change to League Of London, which emphacises the fact it's a team book.

Scoregasm: My football story is currently in comics' version of Development Hell. The script has been complete and with artist Duane Leslie for over a year. I'm remaining optimistic that it'll still happen at some point.

Razor Snakes: What I'm writing next. Roughly speaking, it's Brando's The Wild One... in space. A hugely talented Argentine artist has expressed an interest in illustrating it but nothing's yet confirmed.
Posted by Unknown at 12:41 AM 1 comment: 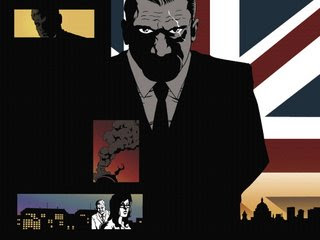 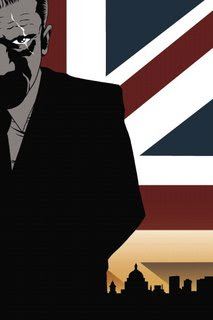 Here as promised is Declan Shalvey's cover for mine and Mick Trimble's Septic Isle graphic novella. It's the first time one of my titles has carried a proper wraparound cover and bloody nice it is, too.
Posted by Unknown at 3:21 PM 1 comment:

Download Hero Killers in its entirety - one week only!

To celebrate Hero Killers' nomination in this year's Eagle Awards, for the next week only you can download the entire 28-page story as a PDF from either...

The book is nominated in category 13: Favourite Black and White Comicbook - British. Polling closes at midnight (BST) on 22 April, so be quick!
Posted by Unknown at 10:49 PM No comments:

* The Diamond order number for Blood Psi is MAY073621. It appears in May's Previews, out in a couple of weeks. Order it from your local comics retailer!

* There's a nice review of Blood Psi over at the Ain't It Cool News website this week. You can find it here: www.aintitcool.com/node/32248

* Keep your eyes peeled in the next few weeks for an interview with Blood Psi artist Keith Burns and myself at www.comicbloc.com. I think the book's being reviewed there, too.

* The wraparound cover to Septic Isle is now finished and it's an absolute cracker. Declan Shalvey has really outdone himself this time. I'll post it here when Dec gives me the nod...

*It isn't too late to vote for Hero Killers in the 2007 Eagle Awards. Go here: www.eagleawards.co.uk/vote.asp and head down to category #13; Favourite Black and White Comicbook - British.

* Work on the Brothers script continues apace. It's a fun, knockabout superhero comic that slowly reveals a far darker heart. It includes lots of action and a couple of storytelling tricks I haven't tried before. I'm hoping to have it finished to hand over to artist Will Sliney at next month's Bristol Comics Expo.
Posted by Unknown at 1:13 AM No comments:

I appeared on local radio station BBC Essex this morning to talk about Hero Killers' Eagle Award nomination and comics in general.

I can't imagine many of the station's listeners will be rushing out to buy copies of my stuff ("I loved the one about the Antichrist" - Brenda from Basildon), but I think it's important for comicbook creators and fans to engage with the mainstream media whenever they're invited to. As long as the coverage comics get in newspapers and on TV and radio isn't of the patronising "Biff! Bang! Pow!" variety then it can only be a good thing for them to be discussed in exactly the same way as new novels, films and plays. Surely engaging with people who know nothing about comics was one of the ideas behind that whole "comics evangelism" thing that popped up briefly a few years ago, so it was good to do my little bit.

Anyway, I had a blast with the show's presenters - John Hayes and Sadie Nine - and even ended up writing a short story featuring them both as superheroes (Purple Hayes and Cat'O Nine Tails) that I later read out on-air. I had to get up at 5.30 to catch a train over to Chelmsford to appear, though, which means instead of getting any work done on Brothers this afternoon I'm likely to spend it asleep or zonked in front of last night's episodes of Prison Break and Heroes.
Posted by Unknown at 2:46 AM 2 comments:

In the second volume of my Devilchild graphic novel series there's a short story about a Cockney vampire slayer called "Lethal" Lenny Limehouse. The idea was that, at some stage, he would be introduced into the main Devilchild continuity, perhaps as a recurring character. I decided to end Devilchild after its third volume, but the desire to do something else with Lethal stuck around.

In 2005, I ended up writing over 100 pages of a graphic novel called Lethal: He Kills Vampires (the title was a nod to Jake Arnott's He Kills Coppers novel). The story saw Lethal freed from police custody to take on a vicious East End crime family who just happened to be vampires. They'd been building an army of powerful blood-suckers with a drug called "Bite", which boosted a vampire's strength and stamina, and made it invulnerable to the usual list of weak spots (garlic, sunlight etc). The twist was that the people who had freed Lethal were vampires themselves, led by an idealistic and headstrong young woman named Ruby. Despite their initial mutual enmity, she and Lethal made a good team. The story built to a massive final battle and a heartbreaking denouement of which I was rather proud.

Unfortunately, it was never finished, mainly because I thought it would take forever for an artist to actually draw what was becoming an increasingly huge project. I spun-off some of the characters into the Blood Psi one-shot that's coming out in July and consigned Lethal firmly to the back burner.

Recently, I was talking to Blood Psi artist Keith Burns by email about working together on something new and remembered that I'd still got this script knocking about. I pulled it up, read it and was pleasantly surprised. There was some good stuff there. Yeah, some good stuff that sounds a lot like Blade: The Series, which ran for 13 episodes on US TV last year before being unceremoniously axed.

In the show, Blade teams up with Krista Starr, an idealistic and headstrong young vampire out to avenge the death of her brother. There's even a drug – called Ash – featured front and centre in the show, as well as a vaccine called Aurora, which gives vampires heightened strength and speed, as well as eliminating their susceptibility to garlic, sunlight etc.

Of course, similarities are inevitable when you're writing in such an over-fished sea as vampire fiction and, let's face it, Lethal is little more than a British spin on Blade anyway. But I'm still a little sad that Lethal: He Kills Vampires probably won't ever see the light of day as it contains some of the strongest writing I've yet done.

Still, if it teaches me one thing it's to strive to do work that is simply more original in less obvious and over-subscribed genres. I'm taking it on the chin...
Posted by Unknown at 2:44 AM 1 comment:

Just how cheesy do I look in this photo? 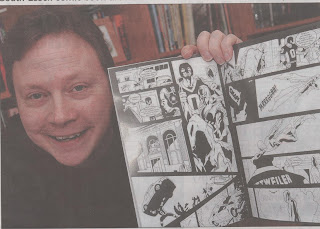 The answer, of course, is very! In case you're wondering, I'm holding up a copy of Hero Killers . The photo appeared in yesterday's Southend Echo as part of a story about HK being nominated for an Eagle Award.

I'm just a dirty publicity whore.
Posted by Unknown at 1:54 AM 2 comments: