Back to the grind

The reason I haven't been posting much recently is because I've had a couple of weeks away from writing comics. In week one I had to finish up my Alan Moore piece for the forthcoming Tripwire annual, and last week I just took the opportunity to recharge my batteries (this involved reading comics, watching DVDs and generally mooching around at home).

To be honest, working long shifts four days a week at the newspaper and writing comics on my days off has taken a toll on me of late. I've been horribly rundown and clearly needed to take things down a notch for a while.

Anyway, I'm feeling much better now so intend to bang out a couple of short stories this week and next (one of which should end up in Accent UK's Robots anthology), before launching full-tilt into my next one-shot: Tim Skinner: Total Wanker. Actually, I might change the "Total Wanker" bit in the title to something a little more reader friendly, but we shall see...
Posted by Unknown at 12:25 AM No comments: 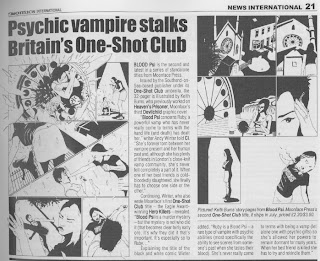 Here's a nice half-page news story taken from the latest issue of Comics International (#202) about my forthcoming one-shot Blood Psi.

There's also a review from Kelvin Green in there, which gives the book 8 out of 10: "Keith Burns turns in crisp and moody black and white art that fits the tone of the story very well... Andy Winter makes good use of the one-shot format to produce a tightly plotted story..."
Posted by Unknown at 8:37 AM No comments:

Got the Blood Psi order numbers from Diamond yesterday. Comfortably over 1,000, which is well up on what Hero Killers did. Not bad for a black and white book by a bunch of unknowns from a tiny British indie publisher.

1) The titular brothers are Phil and Tom Burgess, two super-powered Brits. Phil is Firework, a boozy bad boy who can shoot blasts of searing hot flame from his fingertips and fly. Tom is Empire State Human, a straight-arrow nice guy who can grow to 6o feet in height. They enjoy a love/hate relationship that constantly and inconveniently impacts on all those around them.

2) I was prompted to write the book after noticing how few sets of brothers there were featured in mainstream superhero comics. Brother/sister relationships we have in abundance (Wanda and Pietro Maximoff, Johnny and Sue Storm, Northstar and Aurora) but, apart from Scott and Alex Summers (aka Cyclops and Havok), I've been struggling to think of any other pairs of male siblings running about in the DC or Marvel universe.

3) Tom and Phil are members of a superhero team. They were originally called Crime Crushers (too naff), then The League Of London (too unoriginal), before I settled on The Great Britons. The name was "inspired" by a phenomenally shit awards show I saw recently on ITV1. There was a poll in which people could phone in and vote for their "Greatest Briton". The eventual top three were 3) Margaret Thatcher; 2) Robbie Williams; 1) The Queen. Astonishingly for a staunch Republican, the ghastly German woman is the person on that list I'd least like to punch in the face.

4) The other members of The Great Britons are Lady Lovebomb, Decapitator, Futurehead and Gentleman Jim Bones.

5) Brothers is set in London. When I was a kid and comics were as important to me as oxygen, Spider-Man 's New York seemed like the most amazing, exotic place on Earth, with its amazing skyscrapers and super-powered punch-ups. One of my aims with Brothers is to make London seem similarly amazing and exotic – that's why the Canary Wharf development (ooh, skyscrapers) and the Sir Norman Foster Building (aka "The Gherkin") are both featured prominently in the story.

6) The main villain in the book is a rampaging man-beast called Bloodbath. He's a horrifying monster capable of enormous acts of violence but also the victim of "shadowy powers".

7) The script contains a sneaky reference to Blackadder The Third. I bet no one picks up on it.

8) There's a high body count – and a couple of the deaths are truly bloody horrible.

9) Part of the story's premise is that there are only seven super-powered individuals in the UK – the six members of the Great Britons and Bloodbath. This "supes shortage" plays an integral role as the story unfolds.

10) Artist Will Sliney and I have decided to bring out the book as a two-part US format mini-series rather than the previously-mentioned prestige one-shot. It'll be Moonface Press' very first mini, with each part probably running to 28 pages.
Posted by Unknown at 12:10 AM No comments:

The script to Brothers is finished and with artist Will Sliney. It's a pretty kickass super-team tale with a heart that's nearly as dark as Hero Killers'.

I toyed with the idea of doing it as a two-issue mini-series but eventually opted for the same format as Septic Isle instead - a 52-page, perfect-bound, US format graphic novella. It'll probably retail for £5/$9.

So that's three one-shot scripts I now have out there with artists (Septic Isle and the long-delayed football tale Scoregasm! are the other two). Knowing my luck they'll all be finished at exactly the same time and I'll have to sell one of my children to finance their printing and promotion.

With Brothers done and dusted, I'm now going to finish off the Alan Moore piece for Tripwire and then crack on with a couple of short stories (one for Accent UK's 2008 Robots anthology). That should take me to the end of June, after which I'll spend the rest of the year slaving over three more one-shot titles - the aforementioned Tim Skinner, Razor Snakes and KURSS. The aim would be to have those three wrapped for the end of December.

2008 is already shaping up to be a busy one - projects with Mikey B and (I really, really hope) Keith Burns, plus a second installment of Jacob Marley, the manga-style book I've mentioned on here before, plus a supervillain project that definitely isn't a sequel to Hero Killers. Phew!
Posted by Unknown at 2:05 AM No comments: