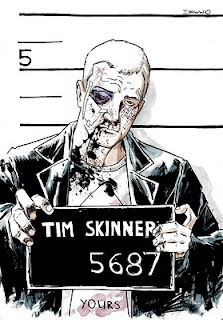 Dec posts new sketches there every Tuesday so check it out here: http://eclecticmicks.blogspot.com

Dec is also the artist on 28 Days Later, which you can read every month from Boom! Studios.
Posted by Unknown at 6:34 AM 1 comment:

THE Tim Skinner: Total Scumbag one-shot is now available as a free download from www.moonfacepress.com - just click the banner at the top of the homepage and you'll be directed to the site's download page.

The download consists of two stories over 43 PDF pages (30MB, under a minute to download). The first tale is written by me and drawn - in glorious full colour - by 28 Days Later artist Declan Shalvey. The original comic came out in November 2008 and was launched at that same month's Dublin City Comic Con in Ireland. Scarily, few of its jokes are out of date!

The second - black and white - story is from 2005's SHRIEK! one-shot. It was Tim Skinner's first appearance (in a tale entitled Zardo Zapp Attacks!) and was written by me with art by Natalie Sandells (pencils) and Adrian Bamforth (inks).

I'd love to do more Skinner at some point - I had a story based around Phonogram all mapped out in my head - but Dec's super-busy with paid work these days so I can't see it happening any time soon.

And, finally, here are some nice things reviewers and comics pros said about the Skinner one-shot...

“Tim Skinner [is] a very self-referential, up-its-own-arse comic that I was destined to love. Even The Boys gets a good shoeing over with hilarious consequences.” - Rich Johnston, bleedingcool.com

"I don’t laugh out loud often, but I laughed out loud at this." - Regie Rigby, comicsbulletin.com
Posted by Unknown at 9:08 AM No comments: