Blimey, where have the last three weeks gone? I can't believe it's been so long since I posted anything. So, what's been happening? The last month has mostly been concerned with lettering the Tim Skinner: Total Scumbag one-shot. It's looking great - Dec has really excelled himself on the art - and the plan is to finish it off in the next week and get it printed up ready for the Dublin City Comic Con later in the month. The Dublin event has its own website, here: www.dublincitycomiccon.com

Meanwhile, copies of Septic Isle should now be with Diamond and in UK shops in the next week or two. North American stores should expect their copies sometime in the next month.

There isn't much to report on the writing front at the moment, but that will change once Skinner is done and dusted. I have a couple of weeks off at the end of November/beginning of December and will use it to catch up a bit - whether that's with the long-delayed Kurse or something else I haven't decided yet. 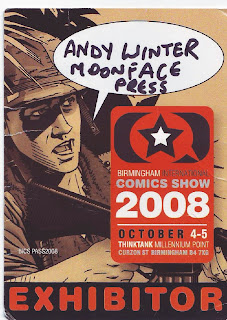 THE third Birmingham International Comics Show was easily the best one yet and the Moonface Press table did pretty good business all weekend (especially on the Sunday, which is usually quiet). The first limited edition print run of Septic Isle has now completely sold out - a second printing hits comic shops through Diamond early next month.

Eleven other Brum highlights...
1. Chatting to Andy Radbourne to iron out a few problems we've been having with our Brit Force project. Things are back on track now though.
2. Being genuinely stunned by Andy's work on another forthcoming project of mine that should be ready for next year's Bristol.
3. Talking secret Blood Psi plans with Keith Burns.
4. Getting my hands on a copy of Frankenstein by Jason Cobley and Declan Shalvey - it's easily as lovely as I thought it would be.
5. Finally meeting Toxic/Bulletproof supremo Matt Yeo after exchanging emails with him on and off since 2002.
6. Getting to spend time with Rob, my oldest mate, who travelled up to Birmingham from Warwick on Saturday.
7. Congratulating my old Devilchild collaborator Jason Dennis after he was offered work by DC.
8. Spending a hugely entertaining Saturday night with Mick, Heather, Jamie, Theresa, Keith and Rob.
9. The moment the event's organisers finally switched off the No Heroics* trailer - our table was right in front of the big screen that had been showing the bloody thing on a constant loop for nearly an hour.
10. The bloke who walked about the show dressed as Heath Ledger's version of The Joker all weekend. Respect is especially due for the hours he spent in the nurse's costume on Saturday afternoon.
11. Getting a lift back to Southend on Sunday night with Jamie and Theresa meaning I didn't have to spend hours on a variety of slow-moving trains.

* No Heroics is a desperately unfunny ITV2 superhero sitcom that was being publicised at the show.
Posted by Unknown at 1:47 AM 4 comments:

I'M heading off to the third Birmingham International Comics Show on Friday morning and plan on arriving in Brum between three and four. That way I get time to check into my hotel, grab something to eat and generally take it easy before heading off to the launch party in the evening. Last year, I got into Birmingham stupidly late on the Friday night and had to cram everything into a couple of hours. It was all a bit frantic and I was a sweaty, knackered mess at the end of it all.

I haven't really given the event much thought but, suffice to say, am looking forward to spending time with the likes of Declan Shalvey, Mick Trimble, Keith Burns and Jamie Richards. Jamie only lives down the road from me but, this year, I've seen more of him at comics-related events than I have in my regular day-to-day life.

I haven't got anything new out for the Birmingham show – Tim Skinner: Total Scumbag won't be making its bow until Dublin in November – so Mick and I will once again be pushing copies of Septic Isle, ahead of its Diamond release early next month. It might also be your last chance to get hold of Hero Killers, Blood Psi and SHRIEK! as I'm running pretty low on copies of all three and have no current plans to reprint.

If anyone fancies visiting the Moonface Press table - you can find us in the compact and bijou Exhibition Suite, table 150. That's between Bulletproof Comics and Lee Thacker. Bulletproof is run by my old email buddy Matt Yeo, who is also the editor of the brilliant boys' comic Toxic. I've corresponded with Matt many times over the years but we've never actually met so I'm really looking forward to finally seeing him in the flesh.
Posted by Unknown at 5:02 AM 1 comment: