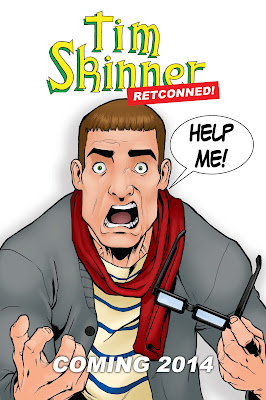 Here's the first teaser image for the Tim Skinner: Retconned webcomic by artist Ruairi Coleman and myself (click to enlarge). It will be released online in three-four parts sometime in the first half of next year.

Ruairi's a terrific artist - you may have seen his work on Uproar Comics' award-winning Zombies Hi series - and you can check out his blog here: http://swinginglead.blogspot.co.uk
Posted by Unknown at 3:08 AM No comments:

SUMMER'S over, the kids are back at school and that means I can put my feet up and watch one of the stack of DVDs that have been sat gathering dust under the TV. Oh, except that I can't do that because I have a shit-ton of writing work to catch up on. A shit-ton of writing work I should have been doing over the summer but couldn't because of the kids, or rather the noise they make. All the time. Even when they are supposedly in bed.
In some ways, the lack of actual writing has been a good thing because I've been able to properly recharge my mental batteries. Which is just as well because I really have to hit the ground running today, right now, this minute.

Work I need to attack includes...

* One last pass through the final third of Defiant! The Legend of Brithnoth. (I say 'one last pass' when there will be several dozen more passes until I am 100 per cent happy with it).
* A lengthy scene-by-scene breakdown for the editor working with me on Nix. Then, eventually, a script.
* A 10-page sample script for Hushers, the project I'm working on with artist pal Manuela.
* Detailed – but punchy – plot synopses for four more projects I'm going to be pitching around towards the end of the year. An international smorgasbord of brilliant artists has been busy producing sample art pages for these.
* Writing issue #2 of The Good Ship Otzi, the 'Douglas Adams on meth' space opera I'm doing for R-Comics. The artist hasn't started drawing issue #1 yet so I have wriggle room here.
* Web comics, including new Tim Skinner (teaser image on the way very soon), and a bizarro horror thing I'm doing with artist Nick Wright.

That little lot should take me up to Christmas (and probably beyond). I'd better get on with it all then...
Posted by Unknown at 11:53 PM No comments: