A panel from a pitch I've been working on with Spanish artist, Jsm. 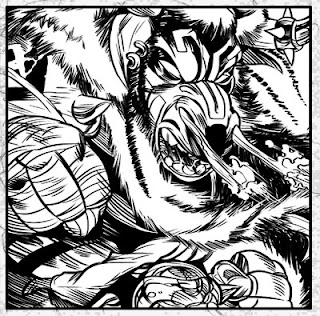 Posted by Unknown at 6:42 AM No comments:

THE good folk over at the Irish Comic News website (www.irishcomicnews.com) are currently serialising the Tim Skinner: Total Scumbag one-shot I wrote back in 2008. The first part is already up, with a second part going live later this week.

I re-read Skinner for the first time in a year or so the other day and was surprised at just how many of the gags still hold up. Zombies rule the publishing world more now they did five years ago, character deaths have become ever more fleeting and meaningless. The more things change in comics, it seems, the more they stay the same.

On the surface, Skinner is all about rude jokes, bodily functions, slapstick violence and childish digs at people far more talented and successful than me. But, believe it or not, the book did have a more serious purpose too. Skinner himself was meant to be the embodiment of the comic industries' worst excesses, particularly the way in which it uses and abuses beloved characters. In 30-odd pages, TS:TS only does what comics companies do to their characters all the time. They're killed, brought back, killed again, made to wear absurd costumes, given insanely convoluted backstories, burdened with ridiculous anatomies, retconned, rebooted, reduced to one or two defining characteristics... I could go on.

I had a couple of people tell me they thought the book was "misogynistic" but that was kind of the point. Is the yobbish Skinner lusting after Spectaculass's large breasts really that different to the way in which Power Girl has been treated over the years? Her only distinguishing characteristics are that she has big boobs and displays them through a little 'tit window' in her costume. Not exactly empowering, is it?

Besides, you aren't actually meant to like Skinner. The title of the story isn't Tim Skinner: Good Samaritan. He's a scumbag and while it's perfectly OK to laugh at the shit he gets up to, he's surely impossible to empathise with. He killed the Superior Seven's pet cat, Kenny the Kickass Kitten, for Pete's sake!

I should, of course, mention that the Skinner one-shot was drawn by Declan Shalvey, the guy who now makes a living on the likes of Venom, Northlanders, Conan and The Massive. I'm not sure if it was the last project Dec drew before he landed the 28 Days Later gig with Boom! but it was certainly one of the last. He did a fantastic job and even coloured the book himself. I love this particular page set in 'Murda-City One' and was always a bit disappointed that no one spotted it was a homage to William Hogarth's famous Gin Lane engraving (which I've reproduced below it so you can compare the two)... 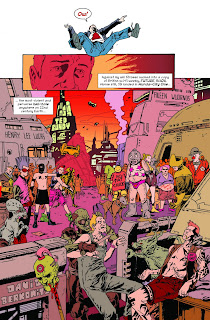 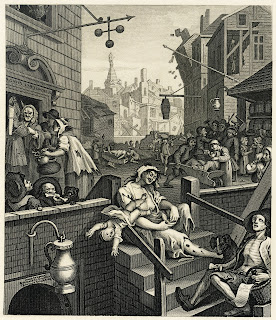 Anyway, all this reminiscing brings me to the real purpose of this post. Skinner's coming back (you knew he wasn't really dead, right?). He'll make his return in Tim Skinner: Retconned either later this year or early next, probably as one of those new fangled webcomics. I have a sack load of new ideas, a heart black with sarcasm and scorn, and an artist ready to make it all happen. Watch this space...
Posted by Unknown at 4:51 AM No comments: