The shock of the new

THERE'S a new four-page story to download over at moonfacepress.com. It's called The Saboteur and was written by me and drawn by Mick Trimble, who you may remember as my collaborator on 2008's Septic Isle one-shot.

Look for the link at the top of the Moonface home page – it's FREE to download as a PDF.

* ON the subject of new stuff, my one-shot football comic – cryptically entitled Scoregasm – should be winging its way onto the net or into print (or maybe both) in the next month or two. The brilliant Duane Leslie – whom I collaborated with on the third volume of Devilchild amongst other stuff – is the artist. Duane also did the cover, with colours provided by Eva de la Cruz (see below).

Bits of the story's DNA come directly from the kind of football stories I read as a kid in comics such as Tiger & Scorcher and Roy Of The Rovers. The strip Billy's Boots was certainly on my mind when I was writing Scoregasm, although my story operates in a very different, far more cynical world. 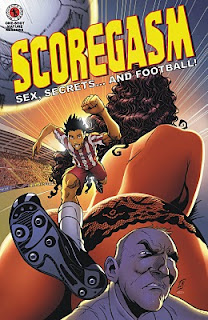 Blokes of a certain age should remember Billy's Boots. It was about a young boy – named Billy Dane – who had a magical pair of football boots that made him the best player on his school team. It was a fun, innocent tale full of last-minute winners, plucky underdogs overcoming the odds and scurrilous opponents who'd have been more at home in the KGB than on a school football pitch. Because of the 'magic' boots, the strip also had an almost-supernatural element (although you were never entirely sure if the boost the boots gave Billy was all in his head). 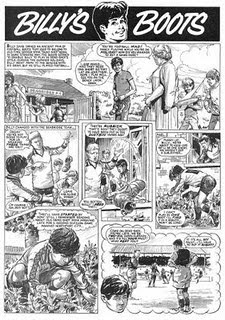 As I've inferred, Scoregasm is a whole lot darker than Billy's Boots (its sub-title is 'Sex, Secrets... and Football'). I guess it's all about the loss of innocence and perhaps reflects how my own opinion of the beautiful game has changed over the years. I LOVED football when I was a kid, was obsessed with it actually, whereas these days I find many elements of the cynical, brutish soap opera it has become thoroughly dismaying.

There are hardly any football comics these days (Striker in The Sun and very little else) so I'm hoping Scoregasm may get people talking. I'd like to reach actual football fans with it but god knows how I'm going to do that. Ideas on a postcard please...

* MY old friend Phil Hall is currently telling the story of his lifelong relationship with comics over at his blog: http://alifeincomics.blogspot.com

Three chapters in, Phil hasn't got to the really juicy stuff yet (I suspect the recollections regarding his time as News Editor at Comics International will make essential reading, as will the chapters dedicated to Borderline magazine), but it's still an enjoyable, nostalgia-tinged read that British fans of 70s Marvel and DC will find essential reading.
Posted by Unknown at 1:22 PM 3 comments: