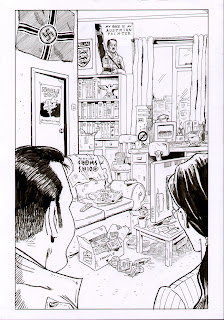 * Around 400 people attended James Redington's funeral in Harlow, Essex yesterday (100 of them in Superman T-shirts) - I was there with artist Jamie Richards, another pal of James'. In fact there were so many people in attendance the church wasn't big enough to hold them all - instead, around half the congregation had to be accommodated in the church hall instead, watching the funeral on a large video screen. A great send-off for a genuinely great bloke.
Posted by Unknown at 12:30 AM