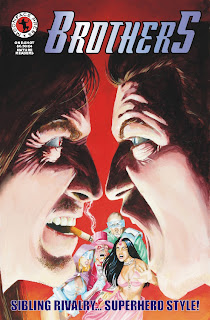 HERE is the cover for the BROTHERS one-shot written by me and illustrated by Andrew Radbourne. The 56-page book is being launched at this year's Bristol Expo (May 9-10).

I had pretty much decided to publish it in the same "graphic novella" format as Septic Isle - i.e. perfect-bound on thick gloss paper for four to five quid. However, because of the bleak economic situation, I've been thinking of doing something that's a bit more cheap and cheerful instead - maybe do Brothers as a straightforward comic on slightly less lovely paper for around £3-£3.50.

It isn't a done deal yet but if I can find a printer that can deliver what I'm looking for I shall give it a go. When flimsy pamphlet-style US comics full of ads are being flogged in stores for £3+, it strikes me that now might be a good time for indie publishers to do a bit of outreach to mainstream readers fed up with seeing their hard-earned cash buy fewer and fewer comics every week.

I'm also considering doing a 16-page comic at some point and selling it for a £1-£1.50. The idea would be to cram as much material in there as possible - maybe a couple of one-pagers along with some slightly longer stuff. The price would massively undercut pretty much everything else that's out there - including a lot of mini-comics - but would have the same top-notch production values as any of the stuff I've done before. This whole "value for money" subject is something I shall return to I suspect...
Posted by Unknown at 11:48 AM

blimey,two posts in as many months...?
love the cover to brothers,if diamond turn this down,then...???
also,love the idea of a bargain basement comic book.
count me in.
hahahahahahaha,etc.