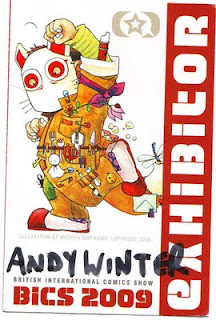 I probably won't stop publishing altogether at this stage - BritForce's creator Andy Radbourne is keen to do a second issue and I might do the odd thing to keep my hand in just to sell at cons. But I'm not sure right now whether I'll be exhibiting at Bristol and Birmingham next year or whether I shall just attend as a regular punter/aspiring writer. I have to say it would be very nice to go to a comics convention and not spend all weekend stood behind a table endlessly spouting the same sales pitches for my comics. It's given me a sore throat and aching legs this year...
Posted by Unknown at 12:10 AM