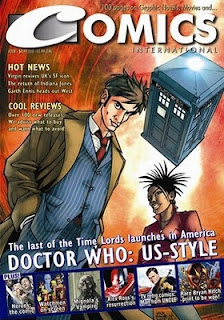 VARIOUS sources on the net (Bleeding Cool, Down The Tubes etc) are reporting the demise of Comics International, the long-running British comics news magazine.

CI seems to have breathed its last after the magazine's publisher - Cosmic Publications - was closed down. Admittedly, CI hadn't published a regular monthly issue in over a year, but I for one will still mourn its passing.

Not only was it a great source of information for me when I returned to comics fandom after a decade away in the late '90s, but it was always very supportive of my writing and publishing. I remember being elated when they gave the first Devilchild volume 8 out of 10 and even more so when they ran a big news story on Blood Psi. Such positive coverage gave me a real confidence boost and definitely helped hike my order numbers with Diamond.

Despite the huge amount of comics stuff on the net, I genuinely miss having a cheap and cheerful British-flavoured print magazine full of news, gossip and reviews to read every month. But maybe I'm just old fashioned.
Posted by Unknown at 6:44 AM