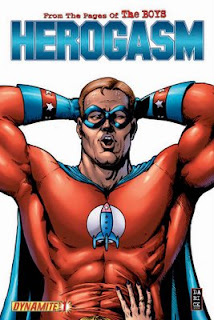 MY good friend and Blood Psi co-creator, Keith Burns, has had two great big dollops of good news recently. In April he became a dad for the first time (to James Francis Burns) and now he's working with Hitman artist John McCrea on the Garth Ennis-penned Herogasm. The mini-series is a spin-off from The Boys and my favourite line is "Come on my hump" which should give you some idea of the kind of weapons-grade filth to expect within its pages...

The first issue is out now – buy it and keep baby James in nappies!

* BRITFORCE #1 and the Brothers one-shot are now for sale in the Moonface Press shop. BritForce (written and drawn by Andrew Radbourne) is £4.50 for 64 pages and a gorgeous Glenn Fabry cover, Brothers (written by me and drawn by Andrew R) is £3 for 56 pages. By the way, just to clarify, BritForce will be an ongoing series with 64-page issues coming out twice a year. Issue 2 should be ready for Birmingham...

* ON Saturday I went to the MCM Expo at the XL Centre in London's Docklands (MCM stands for Movies Comics Media). It was the first time I'd been to one of these twice-yearly events and the first time I'd been to a con as a punter rather than as an exhibitor in years. I have to say, I thoroughly enjoyed it – especially after the damp squib that was the Bristol Expo earlier this month.

One of the most noticeable things about the show was the fact the average age of the punters was around 10-15 years younger than at regular comics cons, with a lot more women and girls in attendance too. In fact, the show attracts many thousands of people - we were in the queue to get in for about an hour - and while that can make things a little bit cramped even in a big exhibition hall it also suggests that London really might be the best place for this kind of event after all.

The MCM show isn't just a glorified comics mart either - there are lots of signings (everyone from movie legend Tony Curtis to Warren Ellis on Saturday), advance previews of films and games and loads of cool Japanese and American merchandise it probably isn't that easy to buy elsewhere in the UK. Then, of course, there's the cosplayers. Now I know a lot of people (mostly grumpy old blokes) don't like cosplayers much but they never cease to impress the hell out of me. The hours and hours it must take to make some of the costumes alone is reason enough to cut them some slack and, to my mind, they always add a dash of colour and exuberance to these kind of events. Not sure about this weird "Free Hugs" thing they've got going on, though...

As a punter I'd have liked to have seen the comics industry represented at the show a little more strongly but apparently that's something the organisers are working on for the future. There were still quite a few comics people exhibiting their wares though, including Markosia, the Geek Syndicate podcast guys, Sean Azzopardi & Daniel Merlin Goodbrey, Gary Erskine and the Tozzer boys. Tables in the 'comics village' area of the event are dirt cheap, too, so there's every chance I might have one at the next MCM show in October.
Posted by Unknown at 1:00 AM

I still can't warm to cosplayers. I guess that makes me a grumpy old bloke, then.

It was good to see you and Jamie on Saturday. It was an alright day for me…