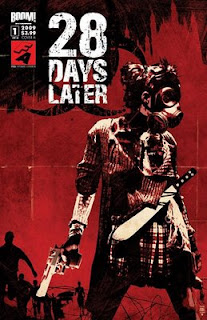 DECLAN SHALVEY, who many of you will know from his work on Hero Killers and Tim Skinner, has a new gig. He's just been named as artist on Boom! Studios' new ongoing 28 Days Later series.

Not only will the title come adorned in covers by the likes of Tim Bradstreet (see above) and Sean Phillips, but its plotted by Alex Garland who was the screenwriter on the 28 Days Later film. You might remember he also wrote The Beach novel that ended up being made into a film starring Leonardo DiCaprio.

By a weird coincidence, I once interviewed Alex – along with 28 Days Later director Danny Boyle – when I was working for men's magazine, Maxim. But that's another not actually terribly interesting story for another day...

Alex Garland, screenwriter of 28 DAYS LATER, lays out a story connecting the film 28 DAYS LATER to its sequel 28 WEEKS LATER in a new ongoing series! Focusing on Selena, one of the three survivors of the first film, as she embarks on an epic return journey to Great Britain! Co-written by HEXED and FALL OF CTHULHU’s Michael Alan Nelson and drawn by newcomer sensation Declan Shalvey.

I shall now be referring to Dec as "newcomer sensation" every time I see him and in every email I send him! It's lucky for him he isn't going to be at Bristol.