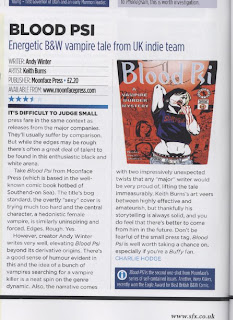 * THE mini-series I mentioned in my last post now has an artist. We're going to meet up at the Birmingham International Comics Show (BICS) in October, by which time I should have written up character descriptions and plot outlines of all three issues. Rather excited about this one as it's completely different to anything I've done before.
Posted by Unknown at 1:19 AM

Thought that was a bit harsh myself. It's a sexy cover because we wanted to sell some books. And compared to some of the stuff out there (Lady Death, that Heroes For Hire cover with the tentacle rape overtones) it's very tame.