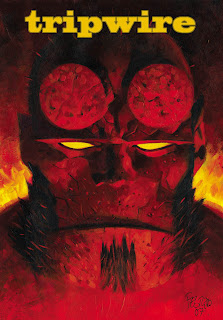 THE Tripwire annual featuring my interview with Alan Moore hit comic stores in the US and UK this week. It's nowhere near the strongest piece I've ever written (I put off transcribing it for ages and then had to get it all done in a big hurry) but trust me when I say Alan waxing lyrical about The League Of Extraordinary Gentlemen: Black Dossier, his new novel Jerusalem, his appearance on The Simpsons and his pull-no-punches views on The Watchmen movie make the 132-page book well worth splashing 10 quid (15 bucks) on. The annual also features great stuff on Hellboy, The Simpsons, Heroes, Hellblazer and 2000AD. That's Duncan Fegredo's cover above.
* I'M having enormous fun with the Tim Skinner script. The titular character has already done some thoroughly unspeakable things and I'm not even halfway through yet. It's quite theraputic to write such an utter, utter scumbag with no redeeming features. In fact, other than making it funny, the biggest challenge so far has been to stop myself reigning in Skinner's more excessive behaviour. He works best when he's bad to the bone.
I guess it would be easy to turn such a project into one big snark-fest, using it to stick the boot into those comics and creators for which I don't especially care but that isn't the way it's turned out at all. Oddly enough, everything being mercilessly lampooned in Skinner is something I have genuine affection for. Let's hope the book's numerous targets see it that way too.
There won't be much time to work on Skinner in the next couple of weeks as I'm off on holiday next weekend. It'll be wrapped up in September, though, and then it'll be time to revisit my currently stalled short story for the Robots anthology before making a start on either Kurss or Razor Snakes...
* IT looks like Blood Psi artist Keith Burns and I will be working together again in the new year. I've got an idea for a one-shot graphic novella that would suit Keith's "abstract noir" art style perfectly. I'll reveal more about the project later in the year.
* ARTIST Mick Trimble is zipping through the pages now on Septic Isle. He has around a quarter of it done and I think we'll be good to go for January when I plan to submit a fully lettered dummy of the book to Diamond.
Posted by Unknown at 1:01 PM

Thanks for giving the Annual another plug, mate. It's appreciated. Your piece is one of the main lynchpins of this first Annual…