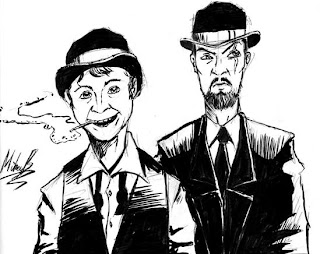 THIS is artist Mikey B's vision of what he and I would look like as gangsters (terrifying, ain't we?). Mikey's the artist who has been waiting an age for me to deliver my Robots script to him and I'll also be teaming up with him on something suitably "gangstery" next year. Mikey draws good gangsters - check out some more, here: http://themeat.net/

* I'M right at the start of another fortnight off work in which I will again try to get the scripts for Tim Skinner and the aforementioned Robots story finished. Not sure quite why everything is taking so long right now but it's enormously frustrating. I'd hoped to squeeze another two one-shot scripts into the tail-end of the year but it looks like I'm only going to have time to do one now - and that'll be Kurss, something I've been promising artist Duncan Nimmo since Bristol 2006.

* PLANS for next year are shaping up nicely. Pendragon, a three-issue mini-series with artist Simon Wyatt, is probably going to be the first thing I tackle in 2008. It's going to be a bit of departure for me as it will be my first foray into the field of fantasy. Dragons, mermaids, magic, all that malarkey...

* I THINK I've officially fallen out of love with Hollywood. I don't watch a lot of films these days but 90 per cent of those I do see are pretty disappointing. I caught Tarantino's Deathproof and Brian de Palma's Black Dahlia over the weekend and, despite the odd thing here and there, both left me pretty cold.

Quality-wise, I think television has really stolen a march on the movies over the last few years and is now vastly superior. Any night of the week I can turn on my TV and find something new and genuinely terrific, be it The Riches, The Wire, Californication or 30 Rock. Every time I glance at a list of what's on at my local cinema it just seems to be an interchangeable list of dumb comedies, CGI-soaked action films, please-give-us-an-Oscar melodramas and misogynistic horror films.

I can't remember the last time I saw a film that really blew me away like Blade Runner, Good Fellas and Crimes And Misdemeanors did all those years ago.
Posted by Unknown at 1:36 AM