My favourite comicbook panel of the week, courtesy of Andy Diggle and Leonardo Manco's Hellblazer #237. A clever little reference to John Constantine's early days as a Sting lookalike perhaps... 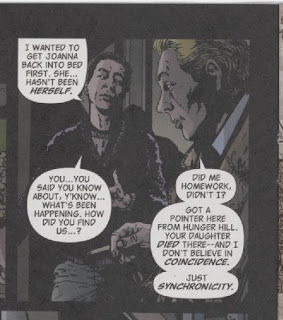 * A BUSY week all in all. After a lot of messing about and multiple rewrites, the script for my Robots anthology story is finally complete. It's only three pages long (four if artist Mikey B wants to spread his wings a bit). Not sure why it's taken me so long to get the story right as it's quite a simple idea.

Anyway, it's called The Saboteur and packs a heck of a lot in to just 20 panels. Hopefully, we'll still be able to make the anthology's end of November deadline but if not there are plenty of other indie press publishers to which we can send it.

* LOOKS like the weekend is going to be a busy one too. I'm in hospital tomorrow, the details of which I really won't bore you with. Suffice to say, I hope I'm in and out of the bloody place as quickly as possible.

On Sunday I'm off into London for Joel Meadows' birthday lunch and booze-up. I hate central London these days but Joel - the brains behind the excellent Tripwire annual - is a lovely bloke and it'll be a good chance to catch up with him as we hardly saw each other at the BICS event a couple of weeks ago.

* NEXT week is all about finishing off the script for Tim Skinner. The second half is written as a first draft but needs a lot of polishing. I've got five days to do it in which should be ample.
Posted by Unknown at 3:31 AM

what i meant to say was,
good luck at the hospital,especially if it's southend. it was only recently that they fitted an exit door on the building...

Cheers mate - hospital was fine but I've been feeling a bit rough since (had to pretty much starve myself for 24 hours before I went in).

I got the text about your wife's band yesterday - strangely my phone said it was from Joel!

Anyway, won't be able to make tonight's gig but one soon definitely.

hi andy,no worries.
it was a bit short notice,i know.
why does john constantine look like the child catcher in that panel?
and have you seen will slineys star wars picture?
i don't usually like buying art off other artists but i'd make an exception in his case. if he's got it up for sale...