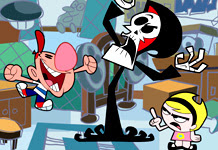 A FUNNY old weekend. Underwent a "test" at the local hospital on Saturday morning which was fine (well, about as fine as having a camera shoved up your arse can ever be) but it left me with an upset stomach for the rest of the day and Sunday. This meant I was in no fit state to travel into London yesterday for Joel's birthday which was a bit of a downer really (I almost said "bummer" but thought better of it).

Instead, I spent most of the weekend flat out on the sofa half-heartedly trying to keep my noisy, disobedient children amused. I ended up watching loads of kids' TV and was gobsmacked by just how good a lot of it is. Justice League Unlimited, Teen Titans and Ben 10 are all great (the first two are substantially better than their comicbook counterparts) but best of the lot is The Grim Adventures Of Billy And Mandy (see pic above).

It's about two kids (sociopath Mandy and cretinous Billy) whose best friend is the Grim Reaper himself. It's violent, surreal and contains loads of gags about bogies, farts and, surprisingly for a kids' show, death. It also seems to have boasted a whole host of intriguing guest voices since its debut in 2001, including Weird Al Jankovic and Fred Willard.

If you're old enough to remember the classic Ren & Stimpy then you'll love every ridiculous minute of it.

* I'VE got an idea for a new superhero project but I'm not sure I should actually go through with it. The subject matter is somewhat controversial (to say the least) and I'm worried that writing it would leave me open to accusations of insensitivity - or worse of exploiting something quite hurtful to line my pockets/boost my career.

The thing is, since I started thinking about this idea on Saturday, much of the story has just clicked into place in my head. It's a good idea and, I think, a pretty original one. Right now I reckon I'm going to give it a shot and see what happens. I can always chicken out further down the line.

Oh, and before you ask, no it isn't about a super-powered paedophile...
Posted by Unknown at 5:17 AM

whatever it is,i want first dibs on it.
if it's available...
for reasons best discussed next time we chat,x
glad to hear all is well down south.

Yeah, Grim's brilliant. It actually has me in stitches from time to time. If you like that you should try Fairly Oddparents, it's about a young boy with two fairy godparents. It's brilliant. Very much the same type of humour.

Oh, and uh, glad to hear all is well in 'that' department.

Ooooo I'm intrigued as to what yr evil mind has invented-mwah ha ha!
Oh and hope all is well with as declan put it 'that' department!

I'm intrigued! I'm trying to guess what it's about! Did having a camera up your fundament give you the controversial idea?